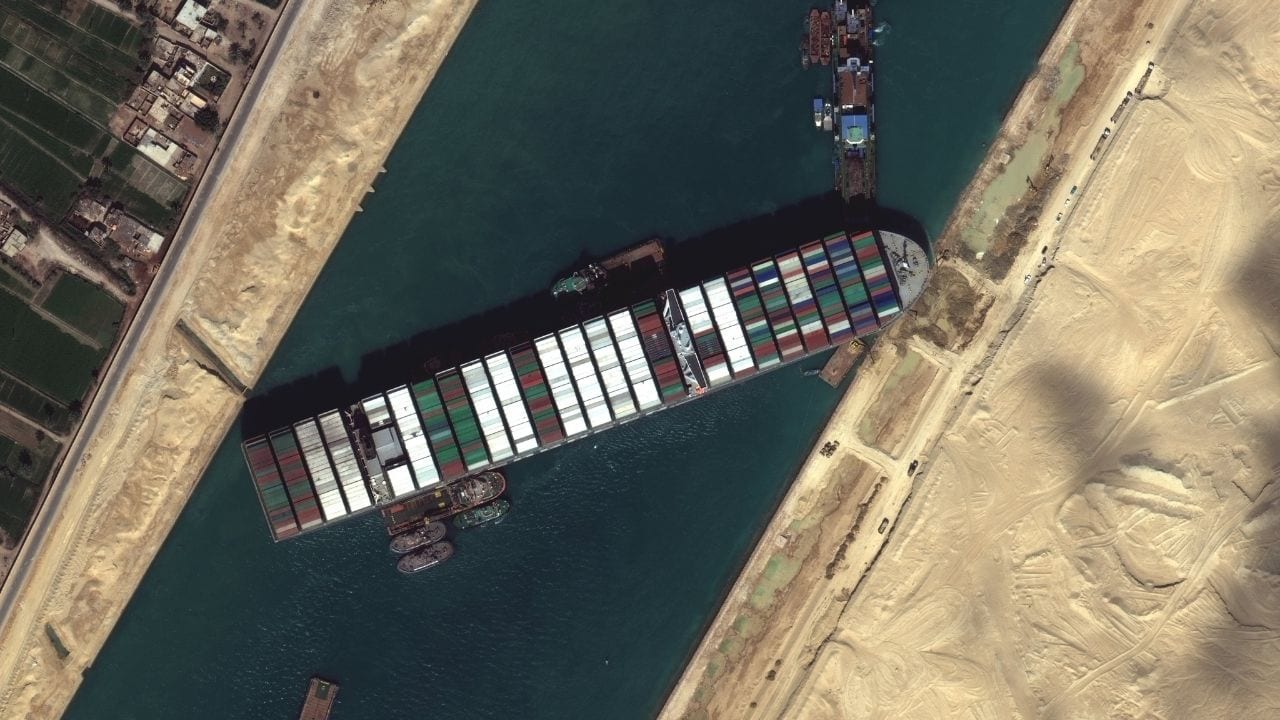 While the Ever Given is floating again and is fully dislodged the Suez Canal blockage will be felt for a long time. The impact will put additional stress on a world economy already strained by the Coronavirus. For the rugged industry, we will see a longer delivery time on all components delivered from Asia. Putting more pressure on a supply chain that is already suffering from the global semiconductor shortage.

The Suez Canal is a 193 km long canal that stretches straight through Egypt, connecting the Red Sea with the Mediterranean. It’s one of the world’s most important shipping routes. Transporting the majority of goods sent between Asia and Europe as well as Asia and the North American east coast.

During 2020 it transported more than 18500 vessels, averaging 51 ships per day. While 51 ships might not sound like a lot, these giants can carry up to 24000 containers each. The same year it’s estimated that 1.17 billion tonnes were transported through the Suez Canal. To put that into an economic perspective, the Suez Canal blockage is estimated to cost $10 billion per day.

The cause of the blockage

On the 23rd of March, the container ship Ever Given ran aground and got wedged in the Suez Canal causing it to become completely blocked. While parts of the Suez Canal have two channels the incident occurred where there is only a single lane, making it impossible to pass by.

According to the Japanese owners of the ship, the reason for the accident was a sandstorm with winds of up to 40 knots per hour pushing it of course. This is however disputed and human or mechanical errors are suspected to have played a role in the ship running aground. Moving Ever Given was quite the challenge and took close to 6 days. At 400 meters it’s about the same length as the Empire State building and weighs about 220.000 tonnes.

Impact of the Suez Canal blockage

The Suez Canal transports 12% of all world trade and 30% of all maritime trade pass through it. The economic impact is going to affect the entire world economy and every hour the canal was blocked is estimated to cost $400 million. Around 450 vessels had to wait to enter the canal from both sides. The Suez Canal has a max capacity of 97 ships per day and the line won’t disappear overnight.

The primary option to the Suez Canal is going around the Cape of Good Hope but that route carries both increased costs and risks. Going around the Cape of Good Hope can take up to two weeks longer and costs around $500.000 more. On top of that, Africa’s east coast is infamous for the number of pirates that roam the area. Some ships have chosen to take the longer route to avoid the long line of ships and have reached out to the U.S army for protection from pirates.

The Egyptian economy is already struggling and will receive another hit from the Suez Canal blockage. The canal generates more than $5 billion every year for Egypt and they have been betting big on it. 2014 they spent $9 billion on expanding the canal and plans are made for further expansion that is supposed to make two-way traffic possible. As recent events have emphasized, that might not be a bad idea.

Goods not arriving on time is not the only problem with the Suez Canal blockage. Empty containers are not getting back to Asia and that is a major problem. There was already a shortage of container space before the Suez crisis and it’s about to get worse.

The container shortage is an entire topic in itself but here’s the short version: Asia was first to be hit by the pandemic but also the first to recover, they resumed business and started shipping out goods again. Meanwhile, North America got hit late by Covid and that means they are also starting up their ports later. Now Asia is running very low on containers while there is an excess in North American harbors, creating a bottleneck.

So instead of recovering towards normal the container shortage got worse and it will be harder for companies to get the shipments they need from Asian manufacturers.

European ports are already overloaded and struggling to catch up with the consequences of the pandemic. Consistently delayed ships have caused a buildup of export containers as well as empty containers.

Now experts fear the congestion is about to get worse. With the Ever Given holding up traffic in the Suez Canal hundreds of container vessels have piled up and they will now be arriving at the same time. Many experts predict chaos and ships will without a doubt have to wait to get unloaded.

Producers of rugged computers and tech companies, in general, will be amongst those most affected by the Suez Canal blockage. Asia is the world leader when it comes to producing tech components and especially semiconductors.

Rugged devices need semiconductors and there is a global semiconductor shortage currently. Add the container shortage, the Suez Canal blockage, and the congestion in ports. In the end, we get a supply chain that currently is under a lot of strain.

So first the rugged industry must wait for those elusive semiconductors. Once the devices can be assembled there’s the issue of finding a container. When the container is secured the shipment might now have been stuck at the Suez Canal (if it was already sent) or must wait for a delayed ship. Finally, when it does arrive the ports could be filled to the brim, causing even more delays.

So, if you’re waiting for a delivery of rugged handhelds, you might have to wait just a little bit longer. This series of global events, outside of the industry’s control have caused major supply chain issues and right now no one is getting shipments.