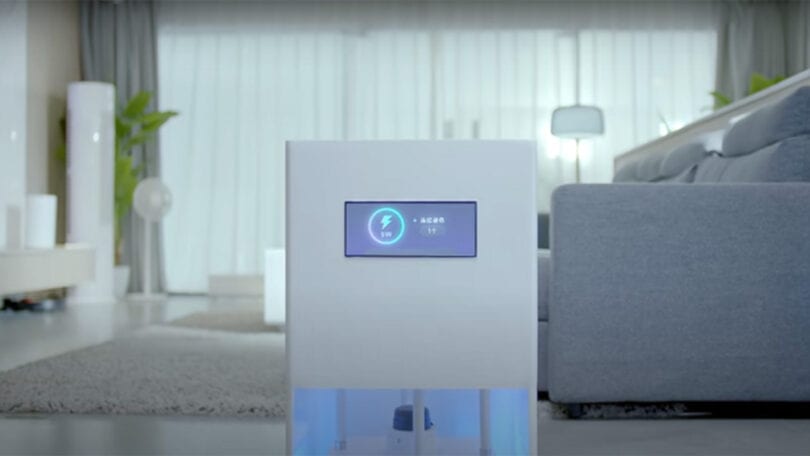 Xiaomi has announced the Mi Air Charge that is capable of long-range wireless charging. Exciting new tech that opens up lots of possibilities.

Current “wireless” chargers might as well be attached with a cable. Considering how you are forced to leave your device so that it touches the wireless charger it’s not that different from a docking unit. The Mi Air Charge technology adds range and makes it truly wireless, this has the potential to cause real change.

How does it work?

The charging unit, which looks to be about the size of a nightstand, has five antennas that localize the phone. These phase interference antennas have in themselves 144 antennas each which transmit a millimeter-wide wave directly to the phone through beamforming.

This does not work on any phone and the device will have to be equipped with an array of 14 receiver antennas. These broadcast the location and convert the millimeter-wave signal into electricity which charges the phone.

Currently, the Mi Air Charge is capable of charging a device at a 5-watts range. It takes about 4 – 6 hours to charge most flagship phones at this rate which is decent. According to Xiaomi, it doesn’t matter if there is an object between the phone and the charger, so you can keep the phone in your pocket and possibly even be in another room.

Xiaomi’s Mi Air can charge five units at the same time. So, your entire family can keep their phone batteries topped up.

Long-range wireless charging for all devices

The plan is for all of Xiaomi’s smaller smart home products to be connected with long-range wireless charging. Basically, you will be able to get rid of cables to your smart speakers, desk lights, vacuum robots, and other smart home products. You’re going to end up with a lot of free power outlets this way.

Speculating about the future

It’s amazing to imagine what the possibilities of this technology are in the future. Imagine never having to plug in your laptop again. With charging zones at home, in the office, and in the local café, this is a real possibility.

Taking it further and putting charging units in for example a warehouse could enable you to keep your rugged computers going around the clock. Forgetting to charge a device would no longer cause efficiency to drop.

If you’re into new and interesting tech, you might want to check out this recap of the CES 2021.