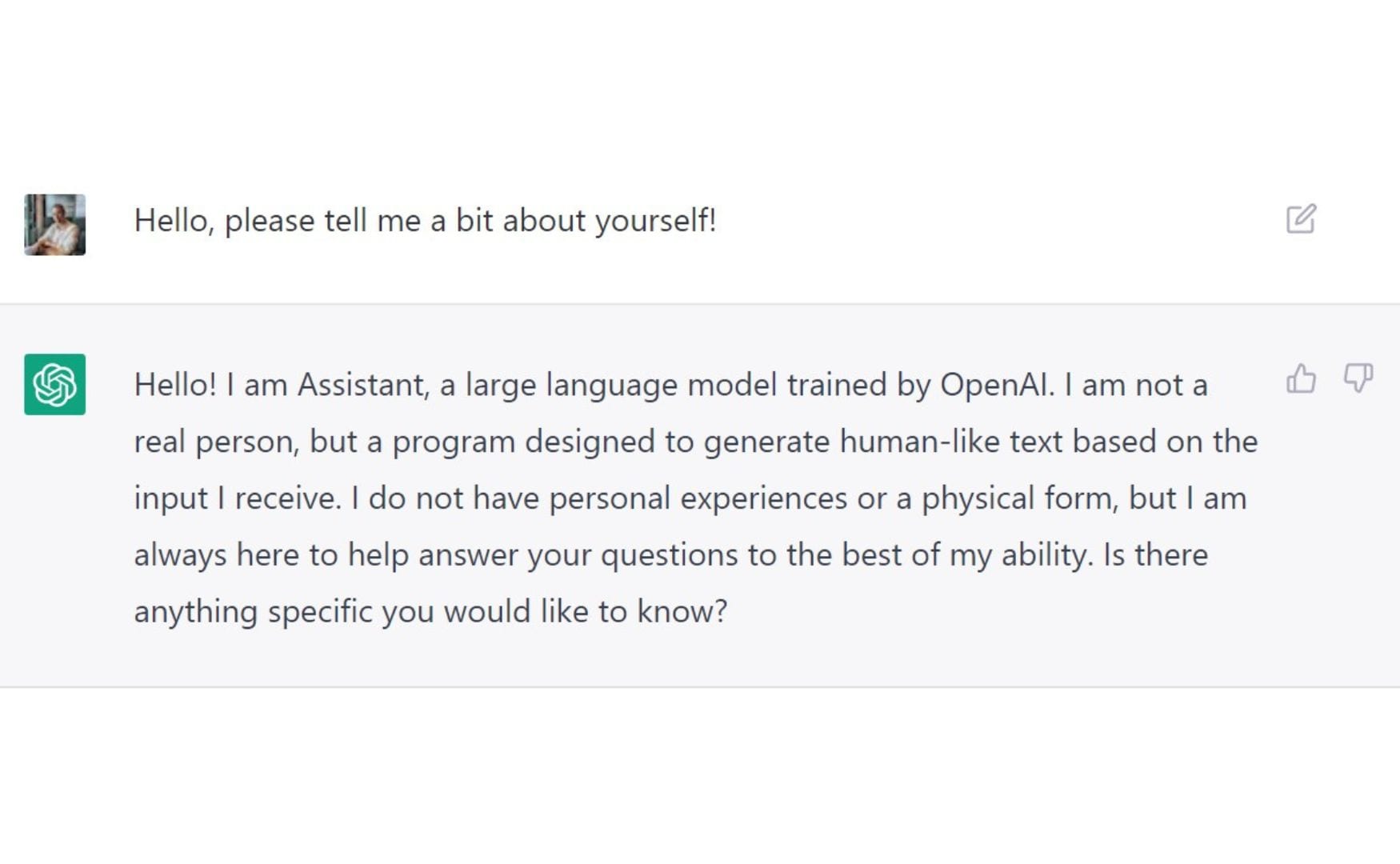 Depending on what corner of social media you are frequenting, you might have noticed some new buzzwords popping up. Text-generating A.I have garnered a lot of interest lately, led by ChatGPT and the language processing model GPT-3. Screenshots of the conversations with ChatGPT are certainly impressive. The A.I is capable of helping with debugging code as well as providing informative answers to most questions you ask it. As a writer, some of the texts generated by the A.I were a little too good, so I decided to have a conversation with ChatGPT about my future.

A conversation with ChatGPT

This is a transcript of my conversation with ChatGPT. The shorter sentences in italic are the input I gave the A.I while the longer paragraphs are the responses I received.

Hello, please tell me a bit about yourself!

Hello! I am Assistant, a large language model trained by OpenAI. I am not a real person, but a program designed to generate human-like text based on the input I receive. I do not have personal experiences or a physical form, but I am always here to help answer your questions to the best of my ability. Is there anything specific you would like to know?

Could you tell me a bit about GPT-3?

GPT-3, or Generative Pretrained Transformer 3, is a state-of-the-art language processing model developed by OpenAI. It is one of the largest and most powerful language models ever created, with 175 billion parameters. This allows it to perform a wide range of language-related tasks, such as translation, summarization, question answering, and text generation. GPT-3 has been trained on a massive amount of data, including books, articles, and websites, which allows it to generate text that is highly coherent and realistic. It is also able to learn and adapt to new tasks and domains quickly, making it a highly versatile tool for natural language processing.

No, I am not powered by GPT-3. While I am a large language model like GPT-3, I was trained by OpenAI using a different approach and architecture. I don’t have as many parameters as GPT-3, so my capabilities are somewhat limited in comparison. However, I am still able to assist with a wide range of language-related tasks and provide useful information and explanations.

I understand, is your data set perhaps based on a previous version of GPT?

As far as I know, the data set that I was trained on is not based on any previous version of GPT or any other specific language model. While I am a large language model like GPT-3, I was trained using a different approach and architecture, and my knowledge and capabilities are not directly derived from any previous model. I was trained using a massive amount of diverse data in order to learn the patterns and structures of human language, and I continue to learn and adapt as I assist with tasks and answer questions.

Would you be able to replace me as a writer?

As a large language model, I am capable of generating text that is highly coherent and realistic, and I have been trained on a wide variety of topics and styles. However, I am not capable of replacing a human writer, as I do not have personal experiences, emotions, or creativity. While I can provide useful information and generate text on a given topic, I am not able to produce the same level of originality, insight, or nuance that a human writer can. I am best suited for tasks that require a large amount of information and a high level of coherence, such as summarization, translation, and text generation, rather than tasks that require creativity or personal expression.

That is a bit reassuring! Do you believe GPT-3 will be able to replace what I do for a living?

It is difficult to say whether GPT-3 or any other language processing model will be able to replace specific jobs or tasks in the future. While GPT-3 is an incredibly powerful and versatile model, it is not capable of replacing the full range of human abilities and knowledge. Language processing models like GPT-3 are best suited for tasks that involve a high volume of data and require the ability to generate coherent and realistic text. However, there are many jobs and tasks that require creativity, originality, empathy, and other uniquely human abilities that GPT-3 and other language models are not currently capable of replicating. So while GPT-3 and other language processing models may be able to assist with some tasks, it is unlikely that they will be able to fully replace human workers in the near future.

Thank you, I feel a lot better about my future now! However, I have one last question on the subject: Are you or GPT-3 capable of producing search-optimized texts?

As a large language model, I am capable of generating text that is highly coherent and realistic, and I have been trained on a wide variety of topics and styles. However, I am not specifically designed or trained to produce text that is optimized for search engines. While I can provide useful information and generate text on a given topic, I am not able to take into account specific search algorithms or ranking factors in order to produce text that is optimized for search engines. GPT-3 may have similar capabilities in this regard, as it is also a large language model that is capable of generating coherent and realistic text. However, both I and GPT-3 are best suited for tasks that involve generating text based on a given prompt or input, rather than tasks that require a specific focus on search engine optimization.

It does seem like I will have a job for a bit longer. Aside from the reassuring answers, it seems that ChatGPT tends to repeat itself occasionally, a problem also noted by the creators at OpenAI. It also makes sense that it won’t ever be capable of forming its own opinions as all the texts it generates are based on data from already existing articles. For the same reason, it makes sense that its creativity will be limited.

However, this does not mean I don’t believe in the technology, it has the potential to be completely groundbreaking. ChatGPT, which is not even based on the more advanced GPT-3, is capable of writing code based on what you ask it to do. It can also answer fact-based questions very well. As an example, if you are looking for historical information it might actually be more convenient to ask ChatGPT than Google. You will get a more specific answer right away without having to look through articles.

For certain tasks, it’s not entirely impossible that artificial intelligence will replace both writers and programmers in the future. They might even dethrone Google from the search engine throne. If you want to try out ChatGPT yourself, you can currently do it for free over at chat.openai.com. For more reading about A.I check out this article on Google’s LaMDA.