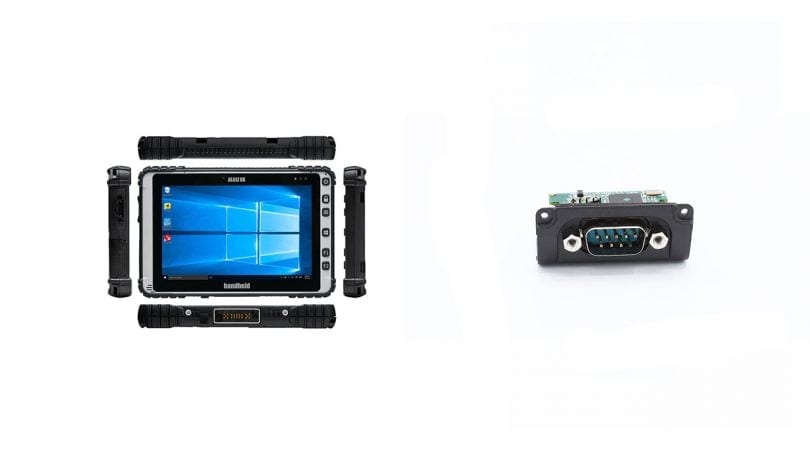 Designed for the automotive and industrial control industries, a new CAN bus expansion module facilitates efficient communication between a rugged tablet computer and devices that operate over a CAN interface, such as sensors, controllers, and actuators.

A CAN bus (Controller Area Network) is a data bus mainly intended for vehicles. The CAN allows controllers and devices in the vehicle to communicate with each other in a fast and safe way.

CAN is specifically a preferred solution when the demands of speed and durability are big in harsh environments. It’s therefore mainly used in vehicles for controls of the engine, gearbox, brake system (ABS), airbag system (SRS), anti-spin system and anti-collision system.

What’s advantageous with the network technique is that it provides access to more advanced functions. Which surely is appreciated by the driver. It also reduces the usage of cables and connectors which lowers the costs and increases the reliability.

For further explanation, see this simple intro of how a CAN bus works:

Recently the ultra-rugged Handheld tablet Algiz 8X got equipped with a new CAN bus expansion increasing its versatility for today’s mobile field workers. Since the CAN interface has high tolerance for electromagnetic interference, this new accessory makes tablets ideal for use in vehicles.

Here’s what Johan Hed, Handheld Group’s Director of Product Management has to say about the CAN bus expansion:

Our new CAN bus expansion module is a powerful tool that allow our Algiz 8X to communicate with CAN systems in vehicles and industrial automation environments, without adding significant bulk.

The ultra-rugged Handheld tablet Algiz 8X  in its natural habitat.

Johan talks about the existing connectivity options and explains what kind of messages that can be sent.

The CAN bus accessory joins our COM port, RJ45 port, and barcode scanner modules to provide a range of expansion options for our customers. It allows the Algiz 8X to send and receive short messages such as sensor values or actuator commands, fully integrating the tablet into the environment’s centralized communication interface.

The CAN bus expansion for the ultra-rugged Handheld tablet Algiz 8X.

Read the full press-release of the expansion to learn more.

We asked an experienced person on the subject, Conrad Blickenstorfer, Editor of RuggedPCReview for his thoughts on what opportunities a CAN bus module can bring:

Offering a CAN bus is definitely a good idea. Today’s vehicles totally rely on electronics. While combustion engines remain fairly archaic big hunks of metal with lots of noise and grime, what makes them, and all the other systems in a modern vehicle, work today is closer to an IoT network than to the wires, points and distributor caps of the past.

Looking for similar articles? Check out our categories News and The Technology